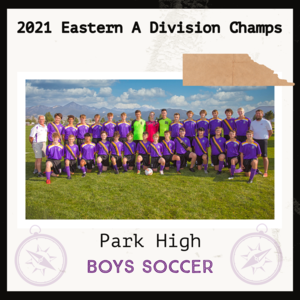 Boys soccer clinched the Eastern Division title last week finishing the season in first place. This is the first division title for boys soccer since 2010. Girls soccer finished third with a most successful season. Read the article for more details.

Boys Soccer won the Eastern A division title last Thursday night finishing in 1st place of the regular season in the Eastern A division between: Lone Peak, Laurel, Lockwood, and Billings Central.   This is Park High's first division title in Boys soccer since 2010. They will move on to a state quarterfinals game against Stevensville Saturday, October 16th at 1 pm at home.  Come out and show your support.

The girls finished in 3rd place with a number of wins this season. They will face Laurel in a play-in game Wednesday, October 13th at 4 pm in Laurel and look forward to a quarterfinal game Saturday, October 16th which will be announced following the Wednesday game.

Congratulations Ranger Soccer! Your fellow Ranger community looks forward to cheering you on!