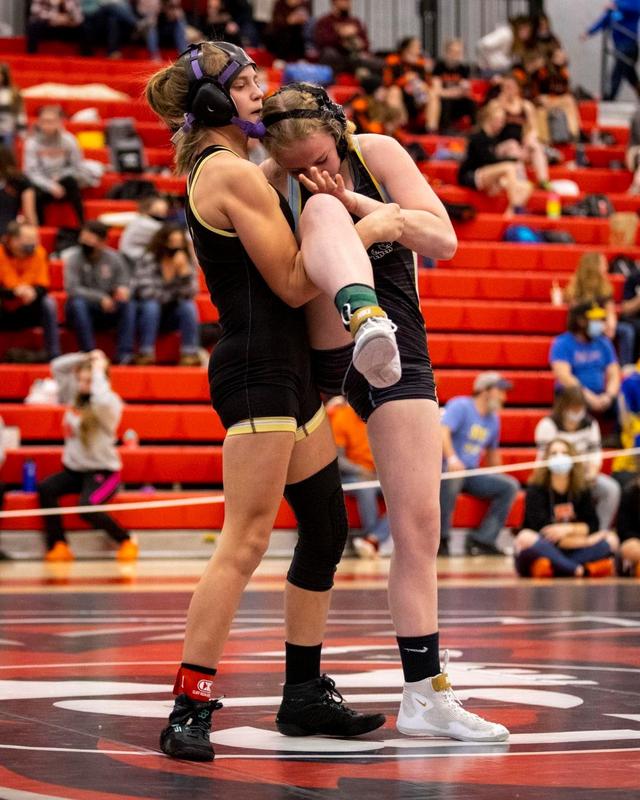 Jessica Gubler takes the state title in the first state-recognized All-class Girls Wrestling State Tournament. A police escort has been arranged for her Saturday evening, February 20th, between 8:00-8:30 pm. Check the PHS Facebook Page for updates on the time.
In the inaugural MHSA Girls Wrestling state tournament, Park High School secured bragging rights as Jessica Gubler took home a state title.
Entering the tournament as the number two seed in the 120-pound bracket, Jessica wrestled Friday morning after a first-round bye.  In what was to become a sign of the future, she pinned her opponents in under 30 seconds in both the second and third rounds advancing to the state semifinals on Saturday. Although trailing behind in points at 8 to 4, Jessica rallied with a second-period pin beating out her semifinal opponent Alley Antonsen of Whitehall. As she moved into finals, Jessica found her groove in an early victory by pinning Hamilton's Hannah Hurst (the number one seed) in her 30-second style. 11 victors were crowned Saturday night, and Park High couldn't be prouder of Jessica Gubler as the first-ever Girls Wrestling state champ.
State Champ Jessica will be welcomed home with a police escort Saturday evening, February 20th between 8 and 8:30 PM.  To join in the escort meet at RX Coffee to follow the van in the police escort back to Park High. Check the Park High Facebook Page for updates on the time.