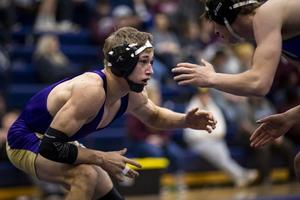 Sophomore Danyk Jacobsen dominated at the 2021 Boys State Wrestling Tournament March 5-6 bringing home a state title in the 138-pound class. However, Jacobsen was not the only wrestler to make it to the Finals. Junior Cade Gubler finished as the state runner-up in the 160-pound class.

March 5th, 2021 marked a different type of state tournament for Boys Wrestling.  Breaking with the all-class tradition usually held at Metra Park in Billings, wrestling fans found themselves cheering on their competitors in various new settings.  For our very own Boys Wrestling team, Miles City was the destination and a place of victory.

Entering the tournament as the number three seed for the Eastern Division, Danyk Jacobsen’s path to victory in the state tournament begins with his compiled season record of 24-4.  Danyk wrestles at 138 pounds and faced his first state opponent Jonathan Williams of Corvallis Friday March 5th. In a 14-4 major decision win over Williams, Danyk immediately finds himself in the quarterfinals facing off against freshman Landon Bishop of Ronan a number two seed from the Western division with a similar record to Danyk’s.  Jacobsen advances to the semi-finals after a 11-4 decision victory to confront an all too familiar challenger Senior Jordan Darby of Sydney. Defeating Jacobsen at least three times in past encounters, Darby was the returning state champ from the 132-pound class in 2020 and had beat Jacobsen in the semi-final round of last year’s state tournament 4-0. Returning to the 2021 State Tournament with a 31-1 record and first seed for the Eastern Division, Darby had what some might call an advantage over Jacobsen who entered the match with a nervous energy.  However, Jacobsen knew intelligent and methodical moves executed with precision would reap the reward as he won in a close 2-1 decision victory. Reaching the Final round, Danyk was matched with the first seed from the west Jason Davis and came full circle to defeat another Corvallis wrestler.  Taking home the state title, Danyk notes that some of his favorite memories include wrestling a final season with the team’s only senior Alex Kober and making it to Finals with teammate Cade Gubler who took second in the 160-pound class.  Congratulations Danyk!

Like Danyk, Cade Gubler entered the 2021 Boys State Wrestling Tournament as a number three seed from the east at 160 pounds.  His quarterfinal victory against the number two seed from the east ended in a 5-3 decision. Camden Johnson of Laurel fell to Gubler in the state quarterfinals after beating him three times during the regular season proving again that so much can change in the post season when people compete at their best. In semi-finals, Cade prevailed in a win over the west’s first seed Lucas Thacker of Columbia Falls beating him 4-3. Finals brought spectators a Cade versus Kade showdown as Gubler met Graves the number one eastern seed.  While Gubler ultimately lost to Graves, we are proud of his finish as State Runner-Up.

Congratulations to our Boys Wrestling Team for a very exciting end to the 2020-2021 Wrestling Season!